Non-native invasive plants can cause big problems for native plants and animals. Biologists and other scientists now commonly refer to invasions by non-native plants as one of the most serious problems facing native plant and wildlife populations in the United States. But how do these invasions occur?

What is a native plant and what isn’t?

Native Plants are defined as any plants that occurred in North America before European settlement.

Non-native plants, are those not originally located in North America or in a specific region, like North Carolina. In North Carolina, there are many non-native plants from Asia or western Europe because these regions have similar climates and environmental conditions to those found in the state.

Sericea lespedeza is an non-native plant introduced from Asia.

Now, how did all these non-native plants get here?  While some non-natives have ended up here accidentally, we brought most of them here ourselves, on purpose. Many non-native species were brought here for use as ornamental, lawn, and garden plants. They were chosen for their attractiveness and hardiness. Some of these non-natives have been here so long that we don’t even realize they are not native. Callery ‘Bradford’ pear, Chinese privet, Japanese Honeysuckle, and Queen Anne’s lace have become such common sights that we tend to think of these plants as native, but they aren’t. Other plants, such as multiflora rose, bicolor lespedeza, and autumn olive were even introduced for the purpose of promoting “wildlife habitat”. However, each introduction has proven detrimental in some ways to North Carolina’s native plants and wildlife.

Native plants are better for native wildlife. Over thousands of years, native plants and animals have evolved together. Natural checks and balances developed in the environment, reducing the chance that a single plant species will increase in number to the point where it completely dominates a plant community. Competitors, diseases, and insects control a plant’s growth and dispersal throughout the native range. 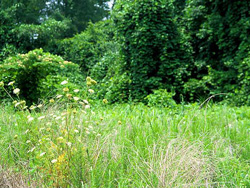 Kudzu, mimosa, and other invasive plants dominate a patch of land.

Without natural checks, non-native plants can become invasive. The same characteristics that make many non-native plants attractive in urban landscapes – colorful berries, pest resistance, and tolerance to harsh conditions – make them difficult to contain. Non-native plants that are attractive to birds and other wildlife are often the most invasive because animals serve as great dispersers of fruits and seeds, often moving the seeds great distances away from where the fruits were eaten. Autumn olive is a non-native plant that produces fruits favored by birds, but the plant grows and often spreads quickly where the seeds are defecated. When a non-native species becomes “naturalized,” or when that plant is able to survive, spread, and reproduce on its own, it can invade the native habitat and crowd out native species. Approximately 25% of the plants growing wild in the United States are naturalized non-natives, some of which have become invasive, growing uncontrolled where native plants otherwise would occur. Native fruit-producing plants may succumb to the competition from this type of invasive non-native, thereby reducing the diversity of foods available to birds and other wildlife.

Invasive plants can be attractive to wildlife, but not good for them. Non-native fruits, while attractive to wildlife, may not provide the best nutrition for native wildlife. Areas covered with only a few invasive, non-native plant species can be harmful because habitats with low plant diversity are poor for wildlife. New evidence from the mid-western United States indicates birds that nest in some non-native shrubs experience poor nesting success. Lower nest height, the absence of sharp thorns on non-native plants, and different branching patterns can allow predators easier access to nests built in non-native plants.

Not all non-native plants are invasive.  There are many non-native plants that do not become invasive, and many can safely be planted in your landscape. However, it takes scientists many years or even decades to fully understand a non-native plant’s potential invasiveness. New information is being gathered, and you should check with your local nature center, botanical garden, or Cooperative Extension agent to find out about a plant’s invasiveness before introducing it to your property. There are a number of plants that we already know are invasive and that pose the greatest risk to the native plants and animals of North Carolina. Yet despite the growing base of knowledge related to the potential problems of non-native plants, species like sawtooth oak continue to be recommended as plantings to encourage wildlife. Until adequate information on the invasiveness of such plants exists, native alternatives should be used.

Invasive plants that you should avoid introducing into your landscape